Travelogue by Jess and Jacob...

The fog across the land began to fade as we wound our way out of the storm that had been blowing the whole day. Suddenly in front of us Snæfellsjökull broke through the fog.

Looming over us, the long dormant volcano's legacy was made manifest and, for what was becoming innumerable times that trip, we were filled with awe. The volcano that had long ago inspired Jules Verne to write his novel "Journey to the Center of the Earth" lay before us and the inspiration was apparent.

How could one not think of traveling to another world while looking at that glacier-capped volcano? In fact, we were having trouble feeling like we were still on Earth ourselves.

It was the seventh day of our trip and we had decided to brave the wind and sideways rain to travel out and around the Snæfellsnes peninsula. We had dressed accordingly for, as the Icelanders say, there's no such thing as bad weather, only bad clothing. We had bought warm windproof Columbia hiking coats and wool leggings to wear under our wind and water resistant hiking pants. The clothing did its job well and we were able to enjoy the sites even in the late fall 38F degree weather.

If you live in the Midwest like we do, the prices in Iceland are a shock. Apparently, my sister who lives in LA had no such sticker shock. The best way we found to stick to our budget was to live off homemade sandwiches, buying the groceries from a local Kronan or Bonus store. Don't forget to bring your own grocery sack, as they will charge you for one. (Again, maybe not a shocker to those whole live in big US cities, but not something we thought of packing...)

Gas prices were also a surprise. Since we rented a car and drove ourselves everywhere, we not only paid something like 50,000 Icelandic Krona for the rental (sounds worse than it is), but gas was also close to $10 USD a gallon. Having an app that does both currency conversion as well as standard to metric (like Unit Converter Pro) is a must. If you plan on driving yourself, especially on "F" roads, we highly recommend springing for the extra insurance.

At the end of our trip, when we were turning in our rental car, we overheard the man in front of us getting extra charges due to rocks damaging the undercarriage of his car and the wind whipping the door from his hands and smashing it into a nearby rock. We looked at each other and we both knew what the other was thinking, "next time, we're getting the car insurance."

We traveled to Iceland in late September/early October. It was a great time of year for us. Mid 40s for the most part, and no snow yet so the roads were easy to travel. Due to the time of year we went, we missed out on the Northern Lights (a little too early in the season), as well as seeing Puffins or whales (a little too late), and we never made it to the northern city of Akureyi. But no worries, we got our fill of natural beauty by going to these must-sees:

1. Blue Lagoon - Yes, it's a tourist trap and probably overrated, but this was one of our first stops on the day we arrived. It was a really lovely way to relax after a long flight, and I am convinced it helped our jetlag. We picked the absolute last entry, which means it wasn't overcrowded, and the contrast of the cool night air and the hot springs water was amaaaaazing.

2. Golden Circle - If you are planning a whirlwind trip to Iceland, the Golden Circle has a little bit of everything. It includes Thingvellir National Park, the Geyser Geothermal area, as well as one of the most famous waterfalls, Gullfoss. Just like other major attractions, these areas are crowded and you can see just as amazing sites if you are willing to go slightly off the beaten path. Also, having visited Yellowstone the year prior, Iceland's one sad geyser was a little lackluster. That being said, the fact that the entire landmass of Iceland is an active geothermal area makes it much warmer than other countries so close to the arctic circle. The government regularly tells citizens to blast their radiators due to too much build up of geothermal heat.

3. Snaefellsnes Penninsula - We mostly just meandered and explored cliffs, lighthouses, and beaches, as well as the famous Kirkjufellsfoss with the behemoth Kirkjufell mountain in the background.

4. Skogafoss - A tall and wide waterfall that you can basically walk right up to. You can also take the 370 steps up to the top for another amazing view. There is a lovely hike along Skoga River, on which we trekked for a couple of miles right as the sun was going down. Once again, we thought we had been transported to another planet. While near Skogafoss, we toured around the Skogar folk museum, which had some recreated traditional houses that we deemed "Hobbit holes" because of their grass-covered roofs and hole-in-the-wall feel.

5. Kvernufoss - Before leaving Skogafoss, follow the path east of the Skogar museum, past some barns, climb the ladder that straddles a fence until you are sure you are on private property, and follow the path probably half a mile to one of our favorite hidden gems of the entire trip. As we said before, a little off the beaten path, the crowds thin, and you get this secret waterfall all to yourself.

6. Seljalandsfoss - Another beautiful, but crowded, waterfall site, this one you can walk completely behind the fall. But if you keep going about 1/4 mi down the path, you will come upon two rock walls that you can squeeze between to find the awe-inspiring Gljúfrabúi waterfall tucked away in a cavern.

7.  Vik - A picturesque village that you shouldn't miss. But before you reach Vik from Reykjavik, stop at Dyrholaey lighthouse and then Reynisfjara beach to see the basalt columns. We've never been anywhere with black sand beaches before, which was special enough, but the basalt columns are yet another stunning view. So stunning, in fact, that there are often brides and grooms getting their wedding photos taken at this beach!

If you haven't caught on by now, we LOVED Iceland and would go back in a heartbeat. We saw a thousand waterfalls, a thousand rainbows, chartreuse mossy grass growing over other-worldly black volcanic rocks. In one view, we could see ocean, black sand beaches, waterfalls, farmland, mountains, and the glacier looming in the distance. It was almost too much to take in at once.

If you are put off by the name "Iceland" just remember that it's further north than Greenland and is actually much warmer! If you go in the summer or fall, and dress appropriately, we're sure you'll love it as much as we did! 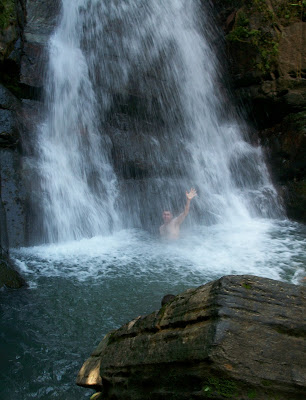 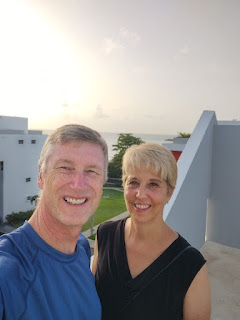 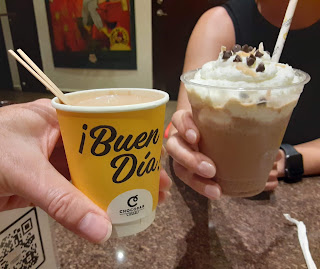